I don't blog very often. Or ever, really. It's why I haven't updated this janky-ass blogspot page to something more professional. Just find me on Twitter. Who needs this place?

That said, I'm gonna recap all the creative shit I had going on in 2020. While I didn't have a new book come out this year, I've been busy as hell otherwise. So please allow me to list everything that I had released in the past 12 months and take some inventory here. And let me apologize now for not putting in hyperlinks for everything. It's a big hassle and I'm lazy. Plus I already did it on my Published Works page. Anyway, here we go:

Feb saw the first of my new recurring humor column for Unnerving Magazine called "Danger's Failed Film Pitches" the premise of which involves me pitching terrible movie ideas to famous directors, with disastrous results. It's very very silly and there is two of them per issue, so I've done six total so far. You can find those in Unnerving #12, #13, and #14 which came out in February, July, and October, respectively.

I was involved in a few other zines this year too. Excuse Me Mag no. 3 ran my meta-fictional story "Danger Slater's Contract Rider" which is something very weird and goofy I wrote specifically to perform onstage. I've made no less than FOUR live audiences uncomfortable with that piece so I'm glad to have tweaked it to work in print form now too. I also contributed SIX entries to Dog Doors to Outer Space, a zine from Filthy Loot filled with bizarro fiction writing prompts from some of the more active voices in the genre. Mine ended up being more weird than helpful, but ya know, I tried.

I had two of my books turned into audiobooks this year as well. The audio version of I WILL ROT WITHOUT YOU was released in May and the one for PUPPET SKIN in December.

FINALLY, I have an ongoing weekly comedy film podcast I've done for the last year with two of my buddies from high school. It's called Life Coach Pandemonium (though we're rebranding at the beginning of 2021 under the banner Better Living Through Cinema) and the premise is we watch a predetermined movie and then pick it apart for lessons we can apply to our own lives. Building an audience there as been a slow and steady process, but we've done over 50 episodes now and are starting to garner a decent listenership.  It's a lot of fun for me to not only discuss film in depth, but reconnect with people who I've known and loved for over 25 years. Listen to the show if podcasts are your thing.

NOW LET ME TELL YOU ABOUT WHAT ELSE I'VE BEEN WORKING ON. You see, publishing is the slowest and most frustrating industry in the world, so even with all those little things I just mentioned above, all the biggest and best projects are still in the works. Here's the things I'm hoping to make the most headway with in 2021:

1.) I wrote a book called MOONFELLOWS which I finished in 2019 - a bizarro/sci-fi/alternate history/existential horror/comedy novel...ya know, typical "Danger Slater" stuff. As of now, still no publisher on this, and no plans for release either. I spent a good part of the past year querying and looking into various presses, but it's a bit of a hard sell, I guess, since it doesn't quite fit into a genre. I'm very confident of the quality of the book, though, and I am not going to sell myself short with it, so these days it's just about finding the right person or publisher to help me carry it out into the world. In 2021 I will continue trying to place this.

2.) I finished a novella in the summer called LITTLE MISS APOCALYPSE, a coming-of-age bizarro splatter comedy (I was told it's like John Hughes meets John Waters) which I DID find a publisher for but the contract is not yet signed, so I can't discuss it in too much detail currently, but hopefully that'll change in early part of 2021 and I'll have more information to share with you soon.

3.) I wrote a feature-length gore-soaked horror movie script called THE ROMANCE NOVELIST, the premise of which sees a washed-up romance writer getting trapped in a sentient rural motel that wants to "help" her finish her comeback book. This script went through several rounds of notes with my friend and editor, the great John Skipp, who taught me SO MUCH about the screenwriting process. This screenplay is now lean and mean (or leaner and meaner than it was) and raring to go. Too bad I don't know what the hell to do with it. Ha ha. But it's done, so when the opportunity arises, I will be ready to seize it.

4.) Lastly, I finished the first draft of a proper-length horror novel called IN A QUIET VILLAGE BY THE SEA. It's still got a lot of the weirdness, humor, and ennui that I think people identify with in my work, but wrapped up in a more marketable "horror" package. It is by far the most accomplished thing I've ever written, and I should be finished with the final draft in the early part of the coming year. Don't know exactly what'll happen with it from there, but I can feel the energy in this one, so hopefully big things are on the horizon.

Anyway, that's what I've done and what I got planned. There's some other projects in various states of incubation (at least six) but none far enough along to bother discussing yet. Been working my ass off during this damn pandemic, though. Hopefully I don't get COVID and die.

Posted by Danger_Slater at 11:36 PM No comments:

People sometimes ask me what my books are about. Imagine if Vonnegut was into 80s VHS horror. There ya go. 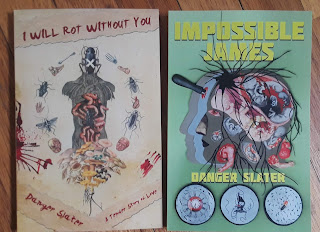 I Will Rot Without You is my Wonderland Award winning book from a few years back. Only 4 copies left.

If you're curious, look 'em up. All my stuff is listed on this site.

Check the comments section for updated inventories before buying.

That's right. My new novel IMPOSSIBLE JAMES is up for preorder now. 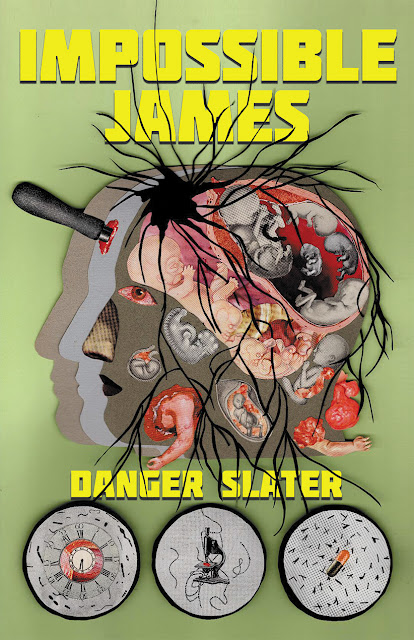 From the back cover:

"My father was dying. There was no hope. Then he took a screwdriver to the brain. Got pregnant. And found the cure for death. Impossible? That's my dad."

Yeah, this is my most realized novel yet. It's bonkers. You're gonna love it.


And to help move those preorders along, I've decided to run a special promo:

1. Preorder IMPOSSIBLE JAMES 2. DM me proof of purchase + your address + the day you were born 3. Receive a handmade card with a weird one-of-a-kind message inside for your birthday 4. Enjoy IMPOSSIBLE JAMES when it's released on June 15th 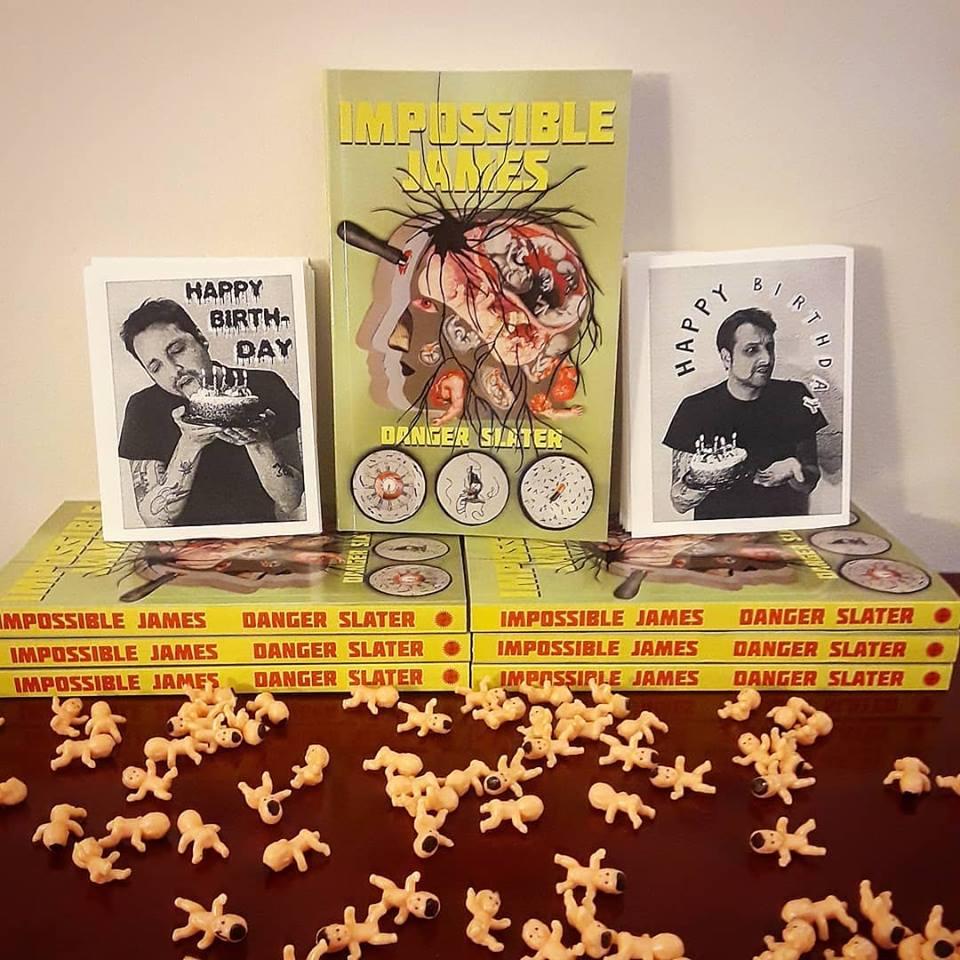 You can order the book today on Amazon, or you can not fuck with that conglomerate bullshit and buy it directly from the publisher right here. And if you want to take part of the birthday promo, you can message me on any of my social medias (Twitter, Facebook, Goodreads, Instagram) or email me directly at danger_slater@yahoo.com

Thanks everyone,
Danger.
Posted by Danger_Slater at 3:54 PM No comments:

I Never Update This!

As you probably know, HE DIGS A HOLE was released. You can get it here. 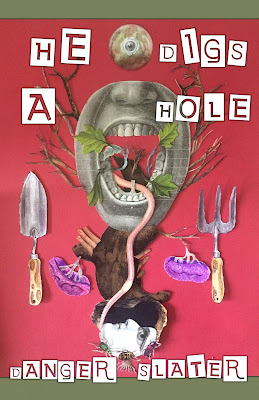 For the rest of 2018: I have a few upcoming anthology publications coming up, as well as a few scheduled readings. And my next novel, IMPOSSIBLE JAMES, comes out sometime in the earlier part of 2019.

Danger
Posted by Danger_Slater at 11:58 AM 3 comments:

HE DIGS A HOLE, My New Novel, Pre-order Up Now!

My new novel HE DIGS A HOLE is up for pre-order now! 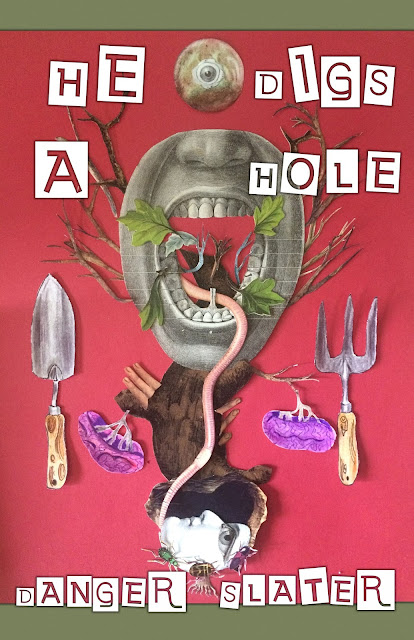 From the back cover: "Get a job. Get married. Buy a house. Cut off your hands and replace them with gardening tools. Dig a hole. Can you hear the worms calling? Keep digging."

Bizarro/horror/comedy/drama. This one is almost impossible to define.

HE DIGS A HOLE Book Cover and Release Date!

Here is the wraparound cover for my next book, HE DIGS A HOLE: 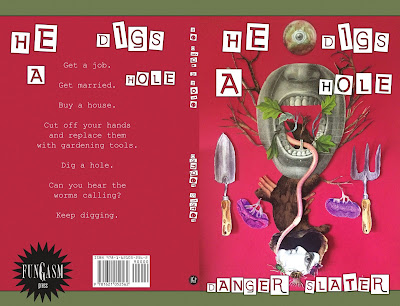 Back cover description: "Get a job. Get married. Buy a house. Cut off your own hands and replace them with gardening tools. Dig a hole. Can you hear the worms calling? Keep digging."

Physical copies will be available in Nov. ONLY at Bizarrocon in Portland, OR (where it will featured at the Friday night Eraserhead Press party)

Aside from that preorders will be up on Amazon soon, with an official release date of Feb. 14, 2018.

In the meantime, catch up with my last books, notably my weird coming-of-age bizarro story PUPPET SKIN and my Wonderland award nominated body horror love tale I WILL ROT WITHOUT YOU.

Email ThisBlogThis!Share to TwitterShare to FacebookShare to Pinterest
Labels: bizarrcon, book, fungasm, he digs a hole, i will rot without you, new, preorder, puppet skin, release, skipp

PUPPET SKIN came out a year ago today. HAPPY BIRTHDAY, MY LITTLE BOOKIE! I'm going to celebrate by eating an entire cake by myself. You can celebrate by buying a copy or leaving a review over on Amazon. 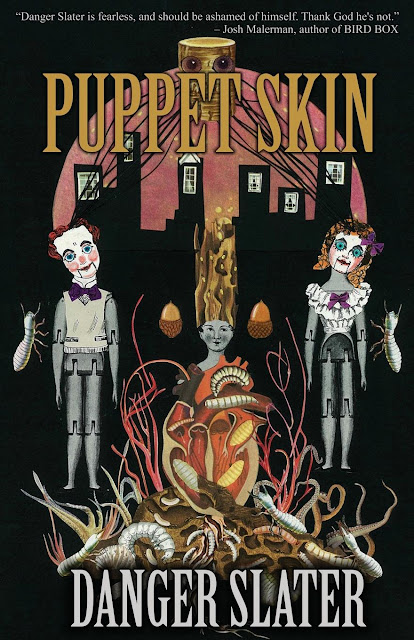 Posted by Danger_Slater at 2:30 PM No comments: 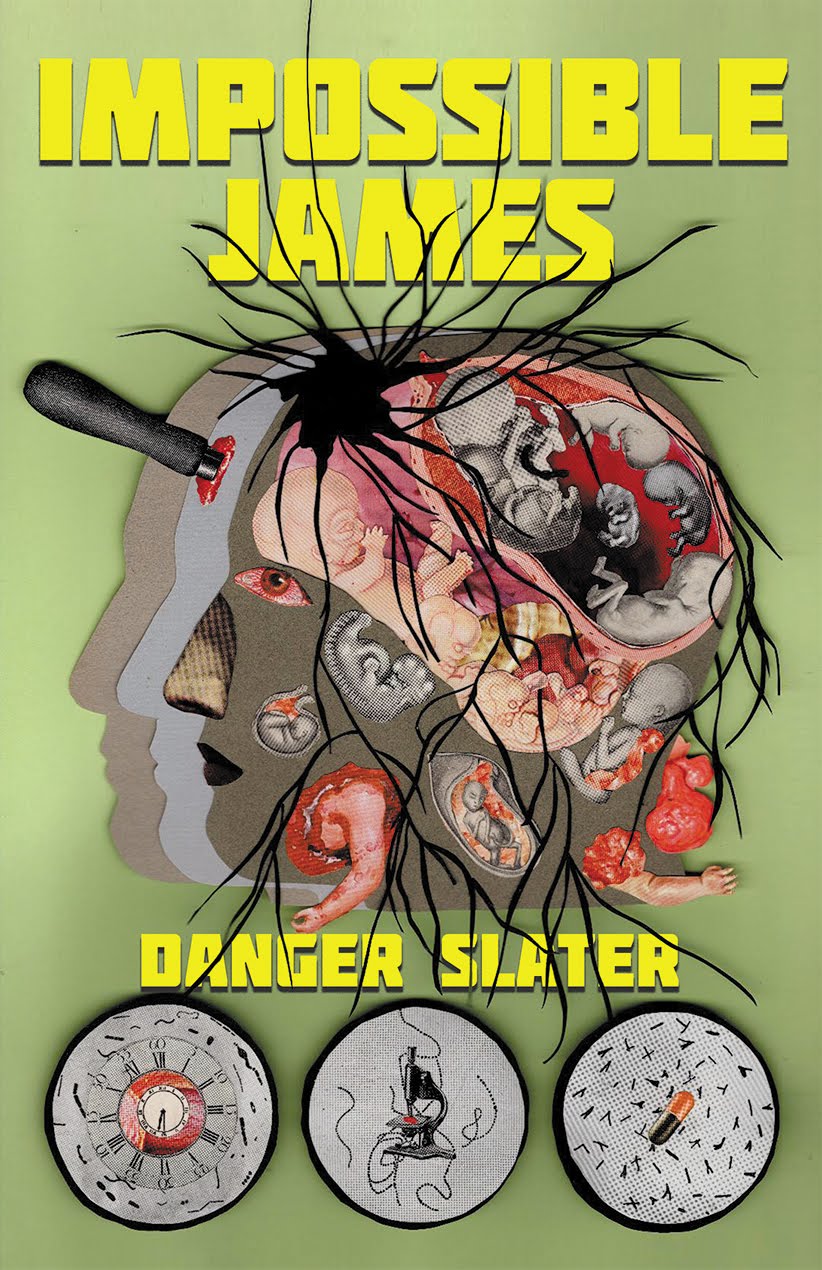 He Digs a Hole 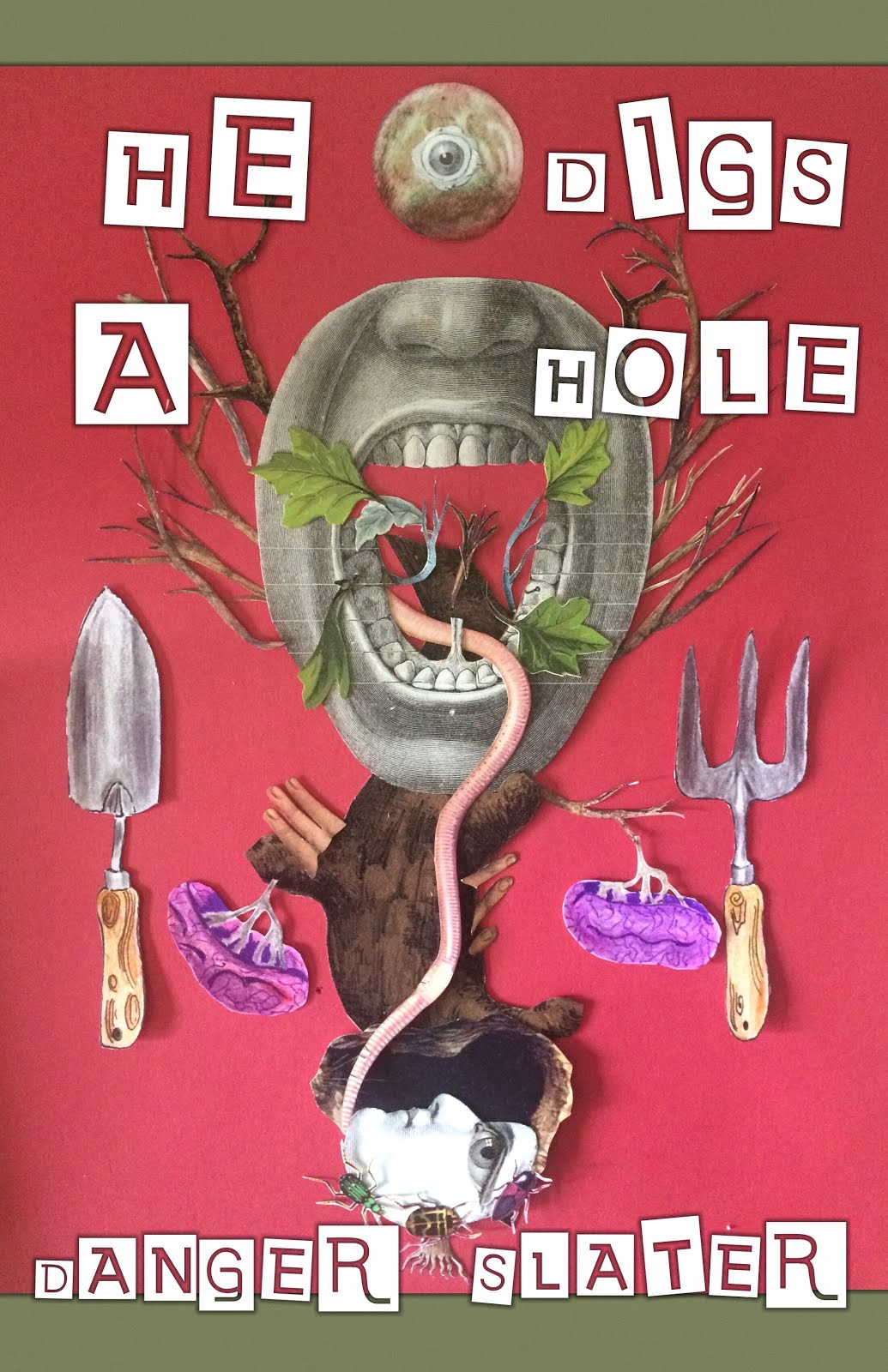 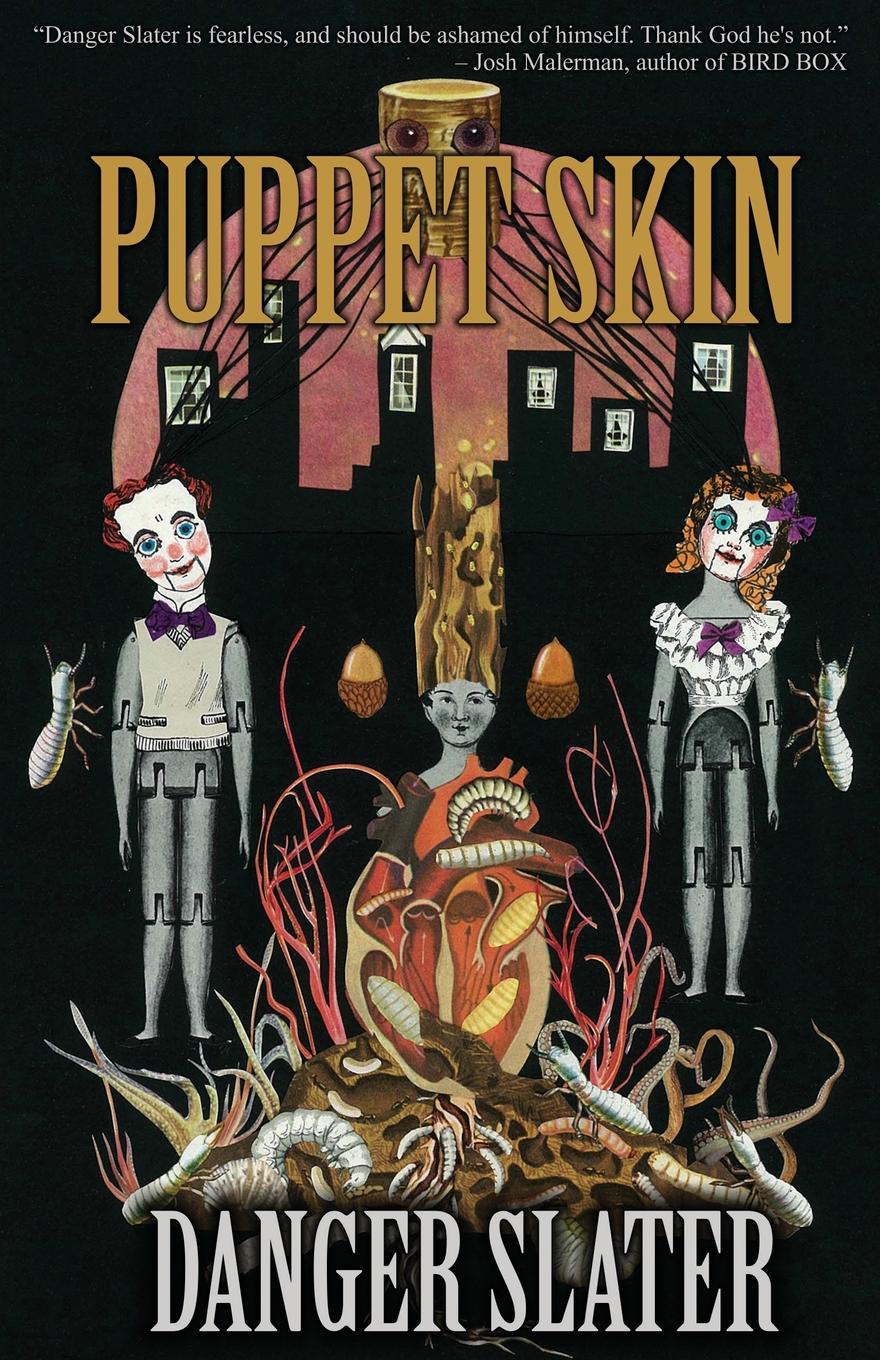 I WILL ROT WITHOUT YOU 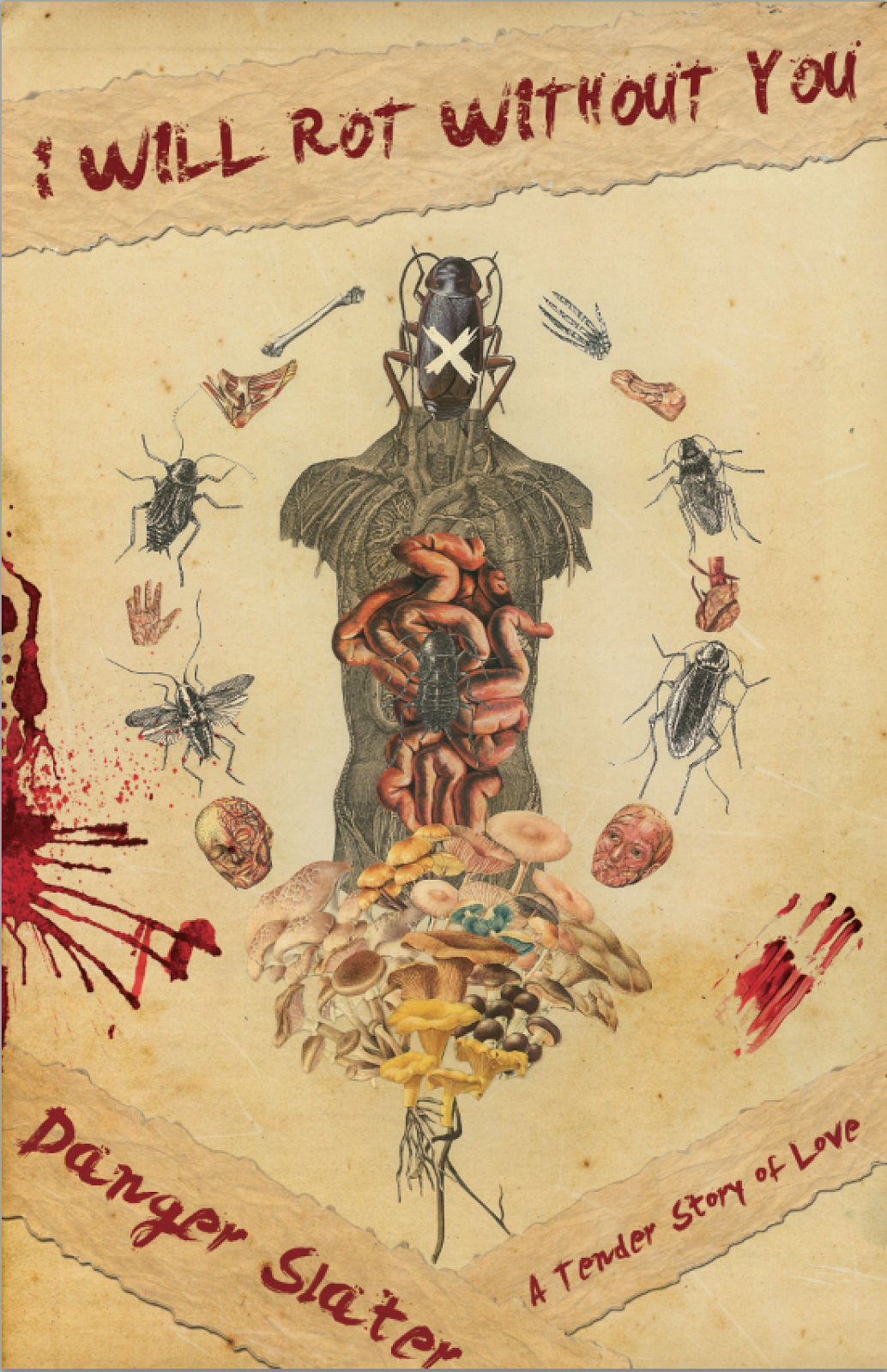 Danger's Newest Novel is Out Now!

Danger_Slater
The world's most flammable writer!